Disclaimer: This is a spoiler of chapter 126 in the original Japanese, all 'interpretations' are just that - I'm not a translator - just picking out a word or two here and there and then make it up by judging by context :) It is all in fun until the translations are out ^_^

Scans are read right to left! 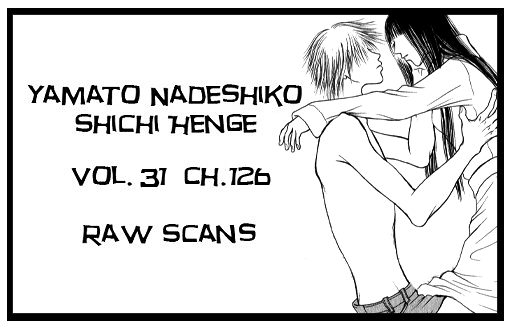 It starts off with Sunako desperately saying "I can't! definitely can't
do it!" but the boys drag her off anyway.

Kyouhei is dramatically shivering, saying "cold... so cold..."
In the previous chapter, Yuki-chan thought Kyouhei was mean and had a hunch that Sunako likes him,
so she "accidentally" froze him xD

The boys ask what they can do to unfreeze him, and yuki-chan says there's one way:
He needs to have uh.. sex with a girl he loves
FOR EXAMPLE Sunako *hinthint* xDD
Evil Yuki-chan runs away, all "kbai!"

The boys try to convince Sunako, telling her it's for her own good and she can't run from it.
She and Kyouhei both, however, are dead set against it.

Sunako tries to warm Kyouhei up in other ways, trying everything from hot cocoa to a hot bath, etc.
Nothing works!

She takes him outside and pours cold water on him, saying that hot water won't work anyway.

Kyouhei desperately begs her to stop, just dripping sexiness.
He tells her it's no use, they might as welll ~~ and then makes his move,
promptly causing sunako to faint.

When Sunako wakes up, she's on a rose-covered bed with Kyouhei.
Kyouhei says something like "enough already... i'll do anything to be warm again"
and approaches a horrified Sunako.

Then, to everyone's surprise, KYOUHEI (not Sunako!) bolts out yelling "IT'S HOPELESS!!!"
Outside, Kyouhei's dramatic soliloquy:
"so cold.. but that won't change anywhere.. I need to.. but there's no
way i could with her!! DEFINATELY NO!!"

*cue fangirls, they see him crying. Just then he remembers yuki's words:
"a girl you love FOR EXAMPLE Sunako-chan..." so any girl's fine, right??

He hugs the nearest one and says something suggestive, naturally making them all attack.

SUDDENLY a giant snowstorm engulfs them.
A crowd of civilians help Kyouhei out of the snow/girl pile (all stripped now) and bring him home.

Kyouhei isn't looking good, and they ask if he's okay. Sunako says he can just
suffer (so stubborn!) when he grabs her arm saying he's had enough and
says something like "so you won't do it huh. ..heh.. so that's how it is.."

He sweeps her off her feet. She struggles but he smiles and says it's no use.
Reality sets in and she faints.
Kyouhei throws her on the bed before slipping out of his blanket and straddling her.

He roughly pins her to the bed. Sunako pleads, "p-please get off of m--!"
"Shut up." he leans forward -- Sunako stops him with her last resort, that Yuki-chan told her
there was another way to save him if not this way?

Then Kyouhei says it was just as he thought, he really couldn't with her...  then he passes out.

He wakes up to the guys telling him to hang in there.
Sunako cuts in with "he's really important to me.... an important... FRIEND"

*everybody falls*
She then proceeds to rationalize the whole scenario about being his friend...
Ii know is that it's a really ridiculous rationalization because of the boys' reactions xD
Takenaga: "those two are really idiots."

She suddenly glomps him and says something valiant *cue traditional JP setting*
Which all of the guys are like "wrong! that's definately not it!!" xD

Kyouhei's all "but it's all hopeless, isn't it?"
"it's not hopeless!!" Sunako cries.

She goes on to explain something about him being bright and something-not-scared-anymore!
Then she--O_O WHAT! ... well uhhh it LOOKS like she says, "I'll suck you off!"
but uhhh no that's definately not it xD

anyway, she leans in for the kiss ...

...but before anything happens, everything's better, Kyouhei's cured!

The guys outside are all "O-o did they...??!" but then they come out of the room shouting
about how everythings better and they didn't have to do anything!!

The boys call Yuki-chan and she's all "whaaatt~ who said anything about sexxxx~??" xD
THE END

Thanks shineemayo1812 for the summary ^_^